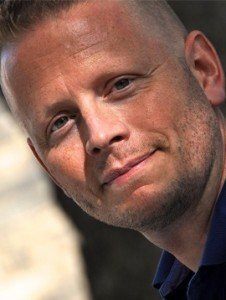 I’m Patrick Ness. I claim three states in America as my home (as Americans are wont to do): I was born in Virginia, my first memories are Hawaiian, and I went to junior high and high school in Washington. Then I lived in California for college (at USC) and moved to the United Kingdom in 1999, where I’ve lived (mostly in London) ever since.

I’ve written nine books: 2 novels for adults (The Crash of Hennington and The Crane Wife), 1 short story collection for adults (Topics About Which I Know Nothing) and 6 novels for young adults (The Knife of Never Letting Go, The Ask and the Answer, Monsters of Men, A Monster Calls, More Than This and The Rest of Us Just Live Here).

I write screenplays as well, including for the movie version of A Monster Calls starring Liam Neeson, Sigourney Weaver and Felicity Jones, out January 2017.

Sorry, there are no events here at the moment.